He stood staring at me, looking dishevelled, damp and shivering slightly, his scarf wrapped tightly round his thin neck. I felt I had no option but to invite him in despite my sense of foreboding.

I led him into the front room and sat him down on the sofa and an awkward silence ensued. Who was this man? Why had he come knocking on my door in the twilight. And then he quietly said his name – Will Baxter.  He told me he had lost his whole family. He had buried them and marked the place with a huge stone.

A shiver went down my spine as I tried to take in my experience in the wood, the stone, the ethereal laughter and the shadowy form. I left him and went into the kitchen to make tea. When I returned there was only a damp patch on the sofa where he had been sitting. He had disappeared!

I searched the room and then the whole house but there was no sign of him. I realised that I had not heard the front door open or shut. Confused, I poured myself a drink but had to sit down as I felt faint, hot and sweaty. Was I coming down with something? I was hungry and went into the kitchen and opened a packet of biscuits. I put one into my mouth but couldn’t taste it. Then I looked down at the paper and saw a headline – “Psychological phenomena associated with Covid-19. Man suffers confusion and hallucinations”. I coughed and went up to bed. 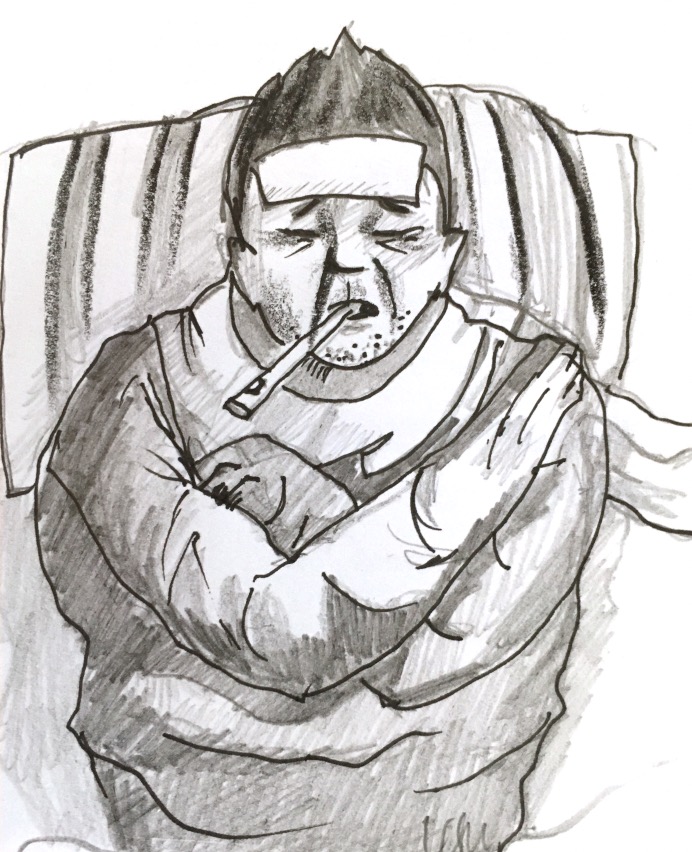 I reached for my coat but he had gone.

He couldn’t be far away. I was drawn into the wood, recalling a year ago; that run, that laugh, approaching dawn, overnight snow, hanging mist …..

Where can the old devil be?

There, on that branch, a red scarf, his scarf, but no footprints.

The old man, where is he?

Another laugh permeates my reverie. I’ll seek it out, I’ll find it, discover it, whoever it is. Excitement and confidence hones the hunter’s instinct; the sound propels me to its source.

Now exiting the wood towards a shallow river, again the laughter, louder, closer.

Start to jog, crunching through the snow. The mist is denser, clothing me in dampness.

The far bank from where the laughter comes can’t be seen.

Peering through the swirling haze, a glimpse.

Is it the old man?

It’s definitely a figure, looking upwards in my direction. The unclothed figure stares; it has no flesh, organs or hair, just a greying skeleton! Its eyes lock on to mine with laser intent.

No laughter, no sound, only silence.

I pick up snow; a ridiculously futile gesture.

I make a snowball, hurl it at the figure.

A hit, a palpable hit to the ribs!

Bone falls away like ash from a smoking cigarette.

It meanders towards me.

Another missile, another hit, the skull disintegrates.

Increased laughter, regeneration repeated, the distance between us reduces.

The overhang of snow where I’m stood is weakened by my action!

The ossified structure is below me; the banking starts to give way.

Slowly, slowly, ever so slowly, sliding down towards the silent figure, its arms outstretching, waiting to collect……………….. 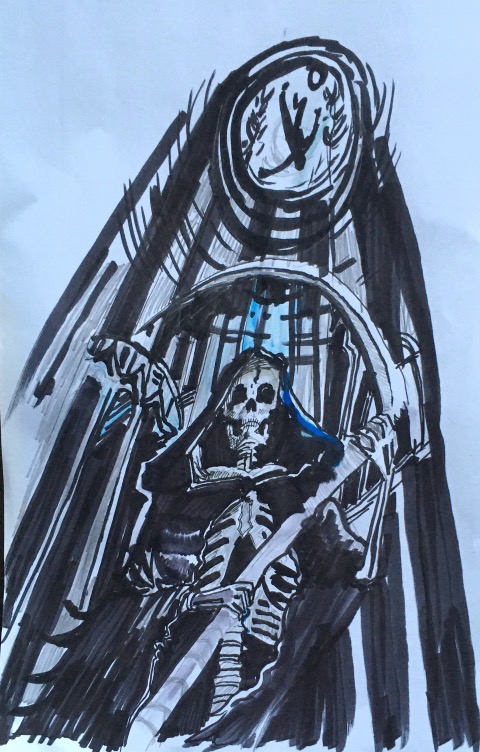 ….OR…could it be different?…click here to read the alternative endings then you can let us know what you think via ‘Contact Us’ above!