1.‘Hullo’, he said, almost cheerily, but with a strange half smile on his face. ‘I hope you don’t mind me knocking, but I was surprised and a little worried when you didn’t pass me at the Standing Stone this morning.’ I stared at him, perplexed, ‘bbbuuut….’ I stammered. ‘I’ve watched you run passed it every day’ he said, ‘except Saturdays of course, obviously your day off,’ he declared, ‘and it surprises me that you never stop to look. It’s a fascinating place you know!’ Uncertain now and more than a little bewildered, ‘but..but…, I was there this morning’, I exclaim, ‘and I saw you!’ ‘No son’, he smirked, almost sneering, ‘I waited for a long time, but you didn’t come past. I was going to stop you and commune’. An odd choice of word I thought, but before I could gather my senses he went on. ‘I know all about the place and it’s mysteries’, he almost whispered, ‘and, if you’d like to make us a cup of tea, and maybe a wee ginger nut, 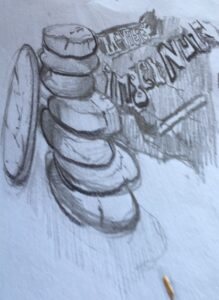 I’ll tell you all about it.’ He made as if to walk passed me into the house, ‘wwelll’, I spluttered, ‘I…’!! ‘That’s ok son, if you haven’t got a ginger nut, I’ll settle for a digestive’! As I turned to go back in I was sure I could hear the sound of distant tinkling laughter….

The light that the church brings into our lives, it is the light of realisation.  Now I knew about the stone, the knocking, the apparition and what I knew had a name…fear. 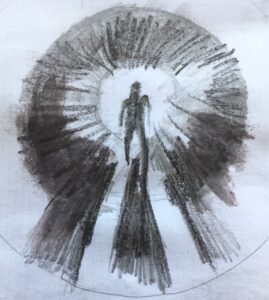 My father had told me about 1918, about the flu epidemic that had followed the horror of the shell-shocked trenches. If anything could be more frightening than the Somme, he had told me, it was the influenza.  Sudden death in the midst of life. So quick. Like the shells, no warning.

When I had gone out that morning for my customary run on the day that this had started, my mind had been full of the affect of coronavirus.

No, I realised, I was not infected by the Corvid-19, but by fear. Fear of the effects of the pandemic: fear of exhausted breathing, fear of sudden death, and the poignant likelihood of catching the virus from my friends, my family, or even my children. From nobody was I safe.

All around I could see the evidence of its shocking effect: shops closed and traffic vanished. Food scarce and anxious people, sensible in ordinary times, turned into hoarders, and ordinary walkers, who would normally give me a friendly greeting, now flinched away from me as if I was infected.

There was no present I could visualise to placate this fear. The ordinary had vanished. And even Government broadcasts to inform citizens about the pandemic had become commercials for the government as if to excuse Ministers from the inexcusable.

Then I remembered. Will Baxter. He had survived the Black Death and had made a new life after the great contagion of the Middle Ages. I must do the same. Come on, Will, I cried, we can do this together.

3. I would have recognised him anywhere, with the distinctive scarf and the old coat, tied with string, wrapping him up against the cold. 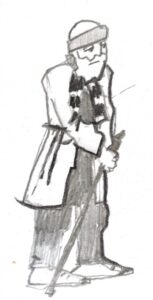 “I can’t believe you fell for it. My powers of mind-bending and suggestion must be better than I thought” he said.

“What on earth are you talking about?” I snapped. It was years since I’d seen him last, but I remembered that superior arrogance, that always annoyed me.

“Well, I was researching social history for a play about the Plague I was writing, and came across Will and his family. Then I remembered you had moved back to Norfolk, so I started to hatch a plan! Come on, lets go back to the wood and I’ll tell you all.”

So reluctantly I did go. He talked non-stop about all the sounds, the sensory experiences he had designed, whilst I felt a rising anger that I had been duped so easily.

“And the stone, and the markings?’ I asked.

“These” I pointed to the spot. But there was nothing there. Only a scuffed area of melting snow and roots.

As we both stood and looked, in the distance we heard bells, whispering and laughter. Real, not imagined or planned this time.  We looked cautiously at each other.

Conjuring up and playing with the past isn’t always as simple as it might seem.

4. “Hello Tessa, it’s been a long time”, the old man said, “I was hoping I’d find you in”.  Laughing with relief I said, “so it was you I saw this morning after all, do come in, I’ve got so much to tell you”.  “Would you like a drink? I could certainly do with one after all that’s happened today”. As I related my strange experiences and thoughts I noticed the beginnings of a smile on Howard’s face. “Oh my goodness, I should have guessed when I thought I saw you this morning, it was all your doing, all of it, but how on earth you stage managed all those events I’ll never know and I don’t suppose you’ll ever tell me”. Things were never simple with Howard. 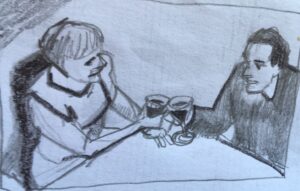 5. “Bloody church bells! Can you hear them?”

The familiar voice exploded when I opened the door. This clever, bright, successful lone wolf Max Horsey, so called mate from my art college days, renowned for imitating a scenario, challenging his anonymity and people’s minds…. he was here in the village and it looked like I’d stumbled upon one of his elaborate performances. I should have recognised his hallmark. As usual he caught me off guard, pushed past me, as I sensed his frustration.

“What the hell are they ringing the bells for at this time?” 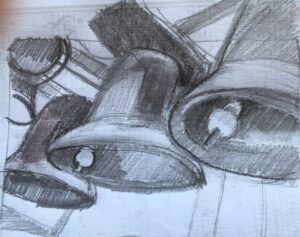 Standing now in the centre of my hall. Routine Max, demanding and rash. Throwing his scarf off, his coat next, he stormed past me into my living room, where I’d been dozing, minutes before.

He looked at me for the first time. Sighed and obeyed while stroking his hair back so hard, his eyes narrowed to two slits.

“ What’s going on? What are you doing here?”

Max looked at me with a reproachful glare and then when that didn’t work he sighed a deep sigh of annoyance.

“ What do you thinks going on….it’s ruined anyway”

A hand had moved to his trouser pocket…the small gun he pulled out was unexpected …my heart was pounding now. Max raised the gun.. I noticed a movement. Raised my head. In the doorway stood two pale women, their heads hooded. Their faces were staring at me with enlarged frightened eyes ..

“Max what are you doing…..one of the woman shouted. The taller of the two. There was a protracted pause as Max lowered the gun. Three seconds of an eternity later his laughter filled the room…

….turned out Max’s practice boundaries had blurred all his sensibilities. The two women, who had, it turns out, saved me, were grad students and his creative Assistants. They had been the floating shadows in the wood. My rescuers, had followed him to my home, as they had been worried by a disintegration in his behaviour. They had noticed disturbing hallucinating, rapid mood changes and suspected that he’d been dabbling in the occult. For some months they’d been involved in research involved in shifting his practice away from representational performance towards challenging the fragility of life. Summoning spirits believing they were housed in symbolic images.

As understanding took hold I had blundered into this performance not once, but twice. Then the  Church bells pushed Max to complete loss of control and rage. So emotionally driven was he; he had believed that the stone carvings, in the wood possessed a psyche from the time of the Black Death . He wanted to capture this release. Show the world his creation and his fear of imaginary disaster.  A Plague in modern times.

I no longer run in woods preferring to run on country lanes. Max is in mental health unit ,has 24 hour care, memory issues and is unlikely to get better.

The church bells have stopped chiming.

6. I stood there bewildered, why was he here, who was he and then opening the door further asked him to come in. He slowly shook his head but said ‘ I saw you in the wood earlier and could see you were troubled’  This was enough and unleashed a torrent from me, everything I had  seen, heard, felt and feared spilling out of my mouth in a disconnected jumble. Gradually the words petered out and I waited. Throughout this my visitor continued to calmly watch me, unshifting, seemingly unaware of the cold and dark.

Without taking his eyes off me, he quietly asked ‘and you would like answers to all of this, perhaps to find parallels from our time of pestilence to another?’ ‘Yes, I think so’ I faltered.

‘Any explanations I may have will never satisfy you as we live our lives suspended between our own imagined, and recreated, past and the possibility of a clear, unambiguous future.’ he continued ‘I could tell you stories of lives cut short, of desperate acts and appeals to long forgotten deities but by my retelling I am describing my own enchantment not yours. Perhaps this will be enough, but I think you need more than I can ever give you and should search for your own answers’

I waited but he said no more. ‘Do I know you, have we met before, what is your name?’ I persisted. He started to turn away but as he went said ‘You would like me to be William Baxter, but I’m not. And yes, we have met before in another time of your troubles.’ 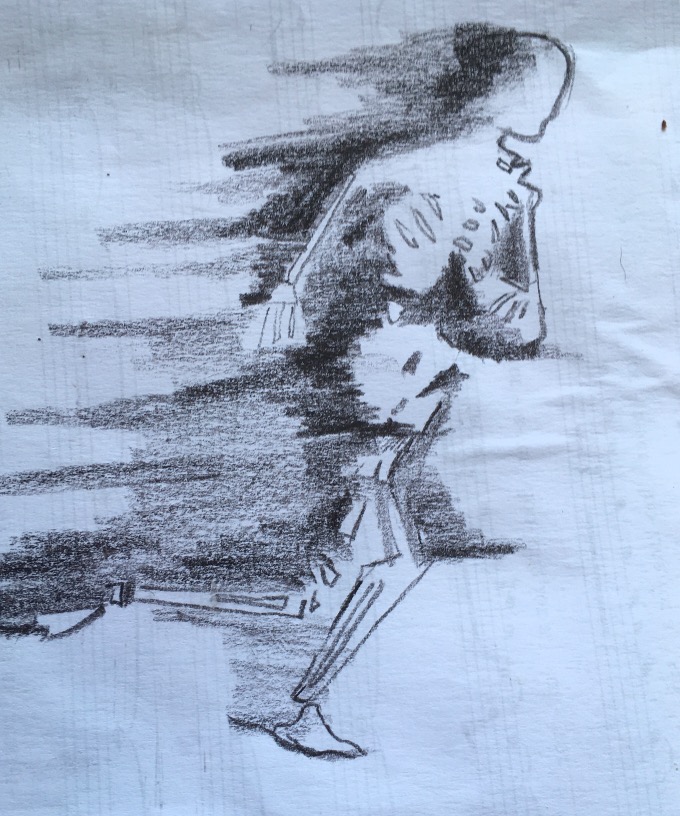 SOMETHING WE DID IN LOCKDOWN! The Shotesham Village writers hope you have enjoyed reading our story as much as we enjoyed writing our wee bits and watching it come together.

Thanks are owed to Ken Holbeck who contributed as well as coordinating the various inputs, to all the other writers including Sue & Nick Astbury, Judie Olivier, Sam B and the two Munros, particularly Lesley for her illustrations. And a very special thanks to Pat Harris who saw the idea in a newspaper and suggested it to us (see below). 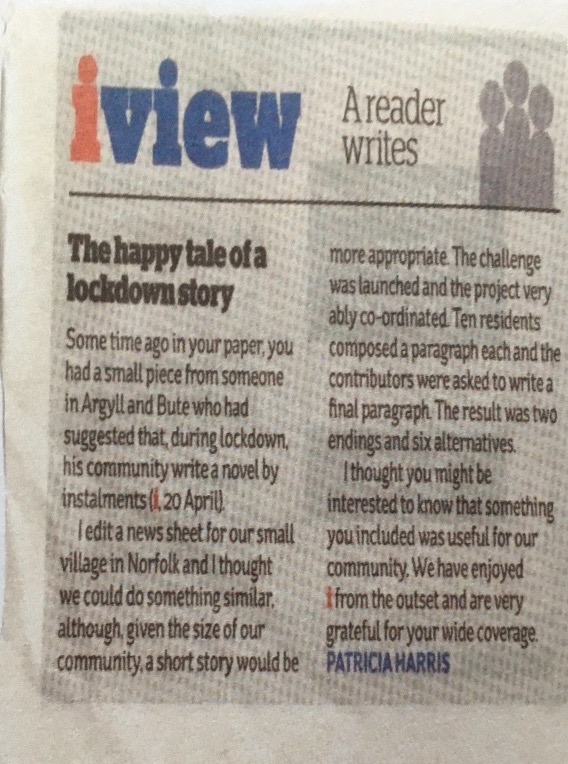