Renewal of the Altar Kneeler in Shotesham St Mary’s Church The altar kneeler measured 22ft and was in a sorry state, so in 2012 we started to investigate if it could be renovated. The advice from the Broderers Group at Norwich Cathedral was that the fading, the moth damage and staining from a velvet backing ruled out renovation. The kneeler was dated to the late 19th century. At this stage we were able to examine the back of the canvas and were amazed at the brilliant colours. 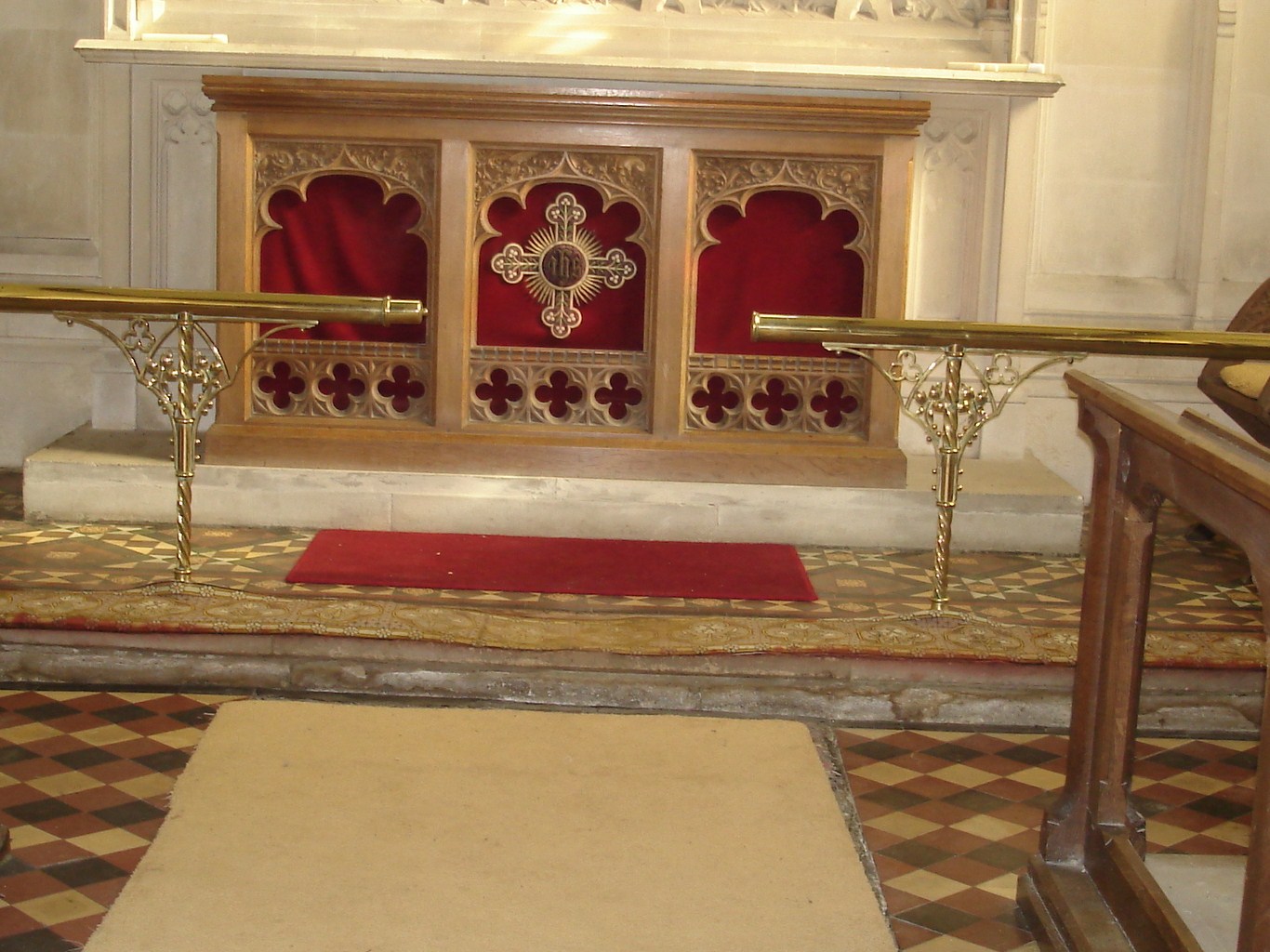 The old kneeler in place

Designs in the kneeler reflect features in the church, for example the curves in the fretwork on the front of the altar are replicated in the shape of the medallions framing the lily and passionflower. The daisy motif and turquoise colour in the border are seen in the tiling around the altar. Our aim was to replicate the original as close as possible. The pattern was painstakingly worked out by Linda Rowe who counted the original stitches. We were able to match the colours from the reverse of the kneeler. Patterns were made, frames constructed and trestles put together. The only difference from the original was to divide the kneeler into three sections corresponding to the uprights of the altar rail. Once the project got under way we had so much support from ladies in the village and the three sections were passed around or based in the Trinity hall. The more experienced stitchers helped the novices, a real community effort. At least 20 individuals have taken part and the sewing started in January 2013 and was finished just over a year later. The finished canvases were sent to be made up professionally. Hover your mouse over the picture to see the title, or click to enlarge.

As a follow up project to the St Mary’s kneelers, the group created a set of Kneelers for The Trinity Hospital Greenwich. See more details.

Individual kneelers The production of the main altar kneeler stimulated a lot of support and enthusiasm. When the main project was nearing  completion of the stitching many people expressed a desire to continue with tapestry. From there a plan was put forward to replace the small kneeler cushions in St Marys with floral designs depicting some of the wild flowers growing in the cemetery. Here are photos of the beautiful designs, all now completed in February 2016

If anyone is interested we can supply the kits. Any old tapestry frames hiding in attics would be gratefully received. If you would like to get in touch please use the contact form below.