It is about this time in August when the competition becomes more intense. Interestingly not much is said by the individual competitors but a visitor to the Globe public house may overhear occasional snippets. The proud boast by a customer that his is 21inches long and 20 inches around the middle vies with the dejected comment from another that his was doing fine until it suddenly turned yellow and dropped off ! Baffling to the uninitiated listener who may hesitate to proffer any questions but the explanation is not far away.

In the late spring customers of the Globe were offered the chance to participate in a contest open to all, a £4 fee (£2 to charity) secured a small insignificant plant in a small compost filled container. Despite its unimpressive appearance this plant , when properly cared for, had the potential to deliver , as its fruit , a large, long, shapely object of a glorious dark-green colour striped with yellow linear bands and pulsing with vigorous life . A marrow no less!

For this years contest the seeds had been extracted and prepared from last years prize marrow by a well known villager who, in the interests of confidentiality shall remain nameless. He delivered the plants to the Globe in his red Suzuki with the learner plate stuck to the bonnet. Twenty six plants were sold. No sets of instruction were given with the plants which those of us without green fingers regard as as a serious omission.

It seems that success in cultivating the marrow rests with only a few growers who produce a consistent result year after year. The remainder have to be content with either a complete failure of growth or a marrow of only a few centimetres ( inches) in length. There is no wooden spoon in this competition !

It is at this point that the unpleasant topic of possible foul-play appears one suggestion being that someone with a vested interest in the competition and a knowledge of Shotesham gardens is carrying, possibly by night, some toxic material to inflict a death blow to the marrows of potential winners. Suffice it to say that no concrete evidence has been found to supprt this worrying accusation!

This year’s competition culminates at the Globe with the final weigh-in of marrows entered on August 28 at 8.30 pm . At this time scrutineers will carry out a scrupulous inspection looking for any irregularities such as quantities of lead shot concealed within the fruit. They will also need to be certain, as far as is possible, that the proferred marrow is indeed from the batch sold by the Globe and that a monster marrow has not been grown from foreign seed.

However, the greatest honour is to be crowned as the grower, man or woman, with the biggest one!

By their fruits shall ye know them! 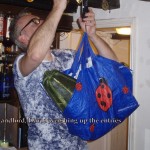 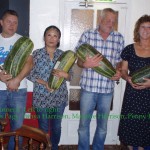 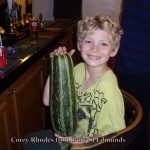