John Bosworth Norton was  fostered, along with his sister, by Gerald and Barry Smith’s Grandmother, Mrs Harriet Harvey, wife of the local Blacksmith. They lived at Chapel Lane,near Ben’s Yard. He was a Barnardos boy and is mentioned in the Shotesham 2000 book, as a choirboy at All Saints Church in 1930.

John joined the Royal Navy and was a survivor of the capsizing of 2 ships, before becoming a crew member of H.M.S. Dasher, he was such a strong swimmer.

One of his ships, H.M.S. Gypsy, struck a mine in Harwich Harbour in November 1939. Barry, who still lives in Shotesham (2020), says he can remember John saying that the ship broke in two and he was in the half that floated. John had been below decks, the explosion sealed the door and then another explosion opened it.

At the end of his last leave, Barry rode with John on their mother’s bicycle to Poringland, so that John could catch the bus… Back on HMS Dasher, having been granted leave on that evening, many of the men were down below decks preparing to go ashore, the ship sank so quickly.

John Bosworth Norton has no known grave and is remembered at the Chatham Naval Memorial and Shotesham War Memorial.

Mrs Harriet Harvey celebrated her 100th Birthday on Sept 8th 1965. She died January 18th 1966 and is buried in All Saints Churchyard. 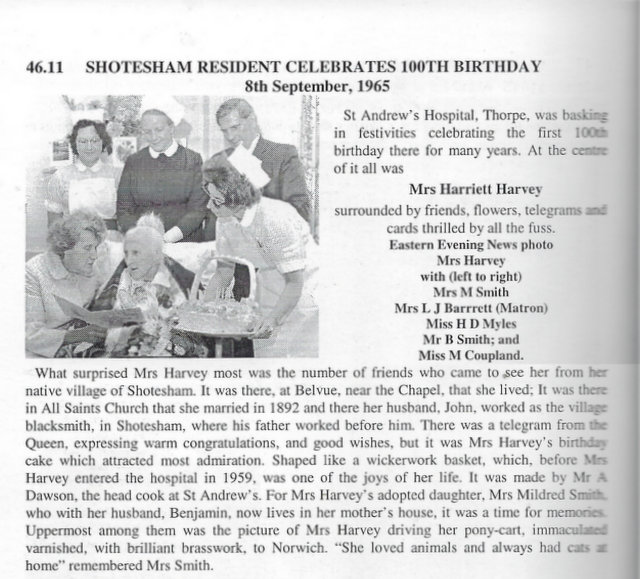