On February 24th 1539, Frances, wife of Henry, Earl of Surrey was passing through the village on her way from Bungay Castle.  She knew her hour had come and exclaimed as she stopped her carriage outside Grove Farmhouse ‘Hurry and get hot water ready, my little Henry can’t wait a minute longer’.  So it was here that Henry Howard was born.  Under King James I he became Earl of Northampton, Lord Warden of the Cinq Ports, Constable of Dover Castle, a Knight of the Garter, Lord Privy Seal and Chancellor of the University of Cambridge and many more.  It is said that he was commissioner at the trial of Guy Fawkes.

The construction date for the building is unknown but there are 16th century features as a recent historical survey discovered, and that it may have been known as ‘Coles’, a name likely to have been applied in the middle ages.

A family recorded as Curson appeared in Shotesham in 1515 and John Curson may have been an early owner of the house.  A more familiar connection with local history is found in the disposal of the property in 1590 to George Knight (alias Kett) who was the son of Robert Kett of Wymondham who led Kett’s rebellion of 1549, in which 4000 people were slain by the Royal Army in the battle of Dussindale.  Kett was hanged in Norwich Castle.

Grove Farm (or Coles) then continued to be occupied by the Kett family and indeed was extended by great grandson George circa 1637.  This discovery has at last explained the monogrammed initials GK on the fireplace.  During the development a terracotta brick was built into the south east gable carrying the words ‘Veritas Odium Parit ‘(truth gives rise to hatred).  It has been suggested that this is a reference to the struggles and tribulations of Robert Kett the Norfolk rebel.

The last female of the line, Elizabeth, married Roger Branch of Shotesham in 1689.  He died in 1707 and she passed away five years later bequeathing a silver porringer to All Saints Church.  A hiding place , a brick lined space under the floor, was found by the present owners some 18 years ago.

The doorway has two supporters, a lion and a unicorn representing England and Scotland.  These are original and almost identical to those at Strangers Hall in Norwich. 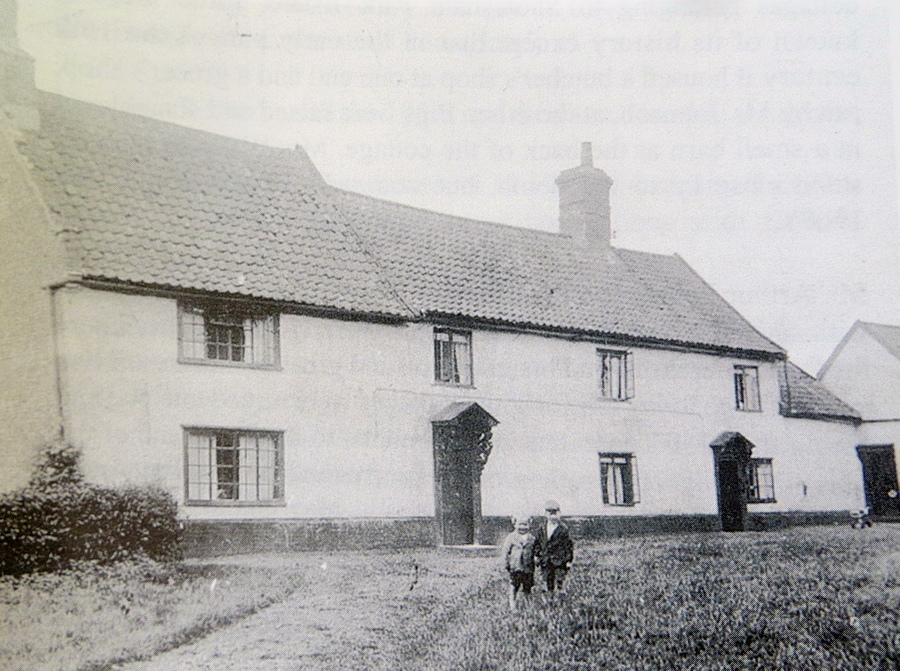